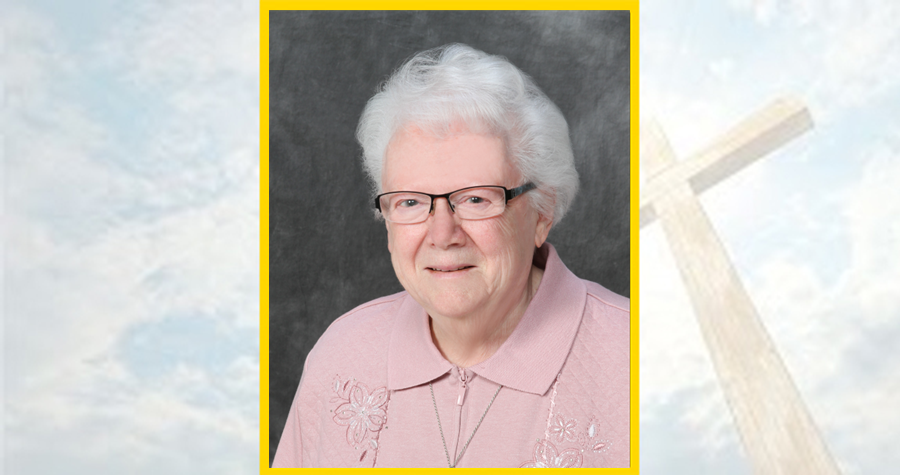 Arlene grew up in Toledo, Ohio as the eldest daughter of Bernard and Evelyn Hoffman. She and her two sisters attended St. Charles School under the direction of the Ursuline Sisters. In 1948 she began her high school education at Notre Dame Academy where she first met the Sisters of Notre Dame.

Respecting her parents wish that she wait to enter the convent until she was older, Arlene entered the Sisters of Notre Dame in 1957 at the age of 22. That year she was invested and received the name of Sister Mary Bernerd, later changed to Sister Arlene Marie.

Sister will be remembered as an outstanding seamstress, a ministry she held for 35 years. Whether the task was making or adjusting a Sister’s religious habit or creating a craft to be sold, the outcome was perfection done in humble self-giving. Her sewing was not routine or mechanical; her heart went into the fabric, and it became prayer. Beneath the seeming ordinariness of her life were treasures of holiness manifested in commitment to community and mission.

Sister taught primary grades in Toledo and volunteered in the school library at Sacred Heart School in New Smyrna Beach, Florida. Sister spent eight years in hospitality and homemaking at Lial Renewal Center in Whitehouse, Ohio, along with two years at St. Joseph School and Parish in Erie, Michigan. Sister was a food service assistant at the Provincial Center for several years until moving to the SND Center in Whitehouse, Ohio. Over the past few years Sister experienced health problems, but she never complained. She maintained her smile and ever-present interest in others, especially enjoying gatherings with family and classmates from Notre Dame Academy.

Sister entered into her eternal jubilee early in the morning of July 16. May she forever behold the Face of her Beloved. Margaret was born on May 17, 1937 in Cleveland Heights, Ohio to Patrick and Delia (Henderson) Friel. She and her younger brother Patrick grew up in a family characterized by deep faith and appreciation for Read more…