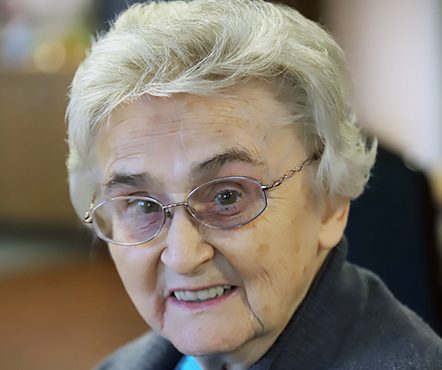 “Prayer is a simple glance directed to heaven which expands my soul and unites me to Jesus.” St. Thérèse of Lisieux

Sister Mary Therese was the youngest child of Mary and William Kirstein. Following her parents’ death, her aunt brought Mary Jane and her siblings to Cleveland so that they could grow up among their cousins. “She was the only mother I knew,” Sister later wrote, “and I grew up loving her dearly.” Shortly after graduating from St. Stephen Elementary School in 1944, Mary Jane became an aspirant at Notre Dame Academy on Ansel Road. She entered the novitiate in 1948, receiving the name Sister Mary Jean Therese, and pronounced her first vows two years later, in 1950. She later changed her name to Sister Mary Therese in honor of St. Thérèse of Lisieux to whom she had a deep devotion.

Sister Mary Therese spent thirty-three years as both a teacher and principal in Ohio and California where she was missioned in 1956. In 1989, she moved to Notre Dame Center in Thousand Oaks.

The phrase “Woman of Prayer” is an apt description of Sister Mary Therese. When an opportunity to share in “Lectio Divina” was offered through Kindred Hearts Ministries, Sister was among the first to join. For her, it was “another opportunity to pray.” As a member of the province’s Apostolate of Prayer, she faithfully spent many hours each day praying for the intentions entrusted to her.

Sister Mary Therese’s spirit of prayer was nourished by the fifteen years she served as sacristan first for the chapel at Notre Dame Center and later in the small oratory in the Health Care Center. Sister saw this ministry as a “fulfillment of service to God and the sisters.” It was also an opportunity to display her special gift for arranging flowers.

Among the highlights of her seventy years in religious life, Sister listed her 30-day Retreat in Los Altos – a time away with God that she loved and cherished. Another source of joy for Sister was her participation in the celebration of the Congregation’s Sesquicentennial in Coesfeld in 2000.

Although Mary Jane and her two brothers lived with different families in Ohio, their aunt found ways to bring them together. Her brother Edwin’s death in the final days of World War II was especially difficult for Sister. As a result, she faithfully included a prayer for the “safety of our military throughout the world and our veterans at home” in either the Prayers of the Faithful at Mass or the intercessions at the community’s Morning or Evening Prayer. Annual visits to her brother William’s family in Michigan and especially to her “extended” family in Ohio were among the joys of the summer months.

Sister was hospitalized in early April. Because of the restrictions imposed by COVID-19, the sisters were unable to visit her. However, one of her nurses, a graduate of La Reina High School, was with Sister Mary Therese during her last day and when she quietly went home to God in the late afternoon of Tuesday, April 7, 2020. Perhaps the quality which most endeared Sister Mary Sheila to her sisters was her ability “to listen.” She gave to each sister her full attention and wise advice. Each came away feeling supported and loved, knowing that whatever they had shared would be held in confidence. Sister Mary Sheila was truly a “Wisdom Woman.”